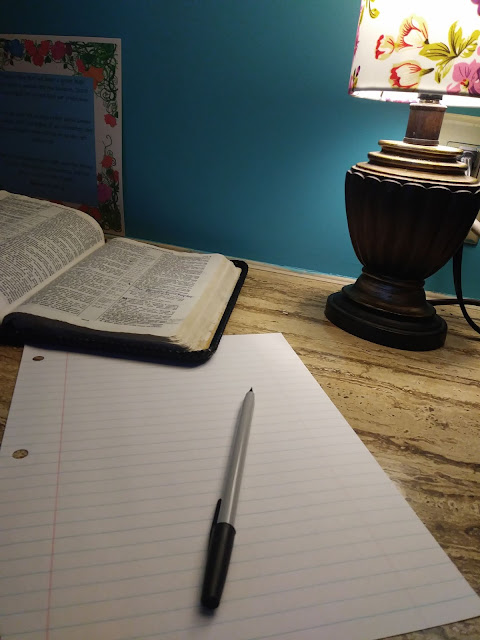 A little over a month ago, our bus brought some new children to church.  2 of them were in my class.  There was a younger boy that was full of energy.  Then, there was an older boy that was 2 months away from being in the teen class.  I wondered how it would be having an older boy in my class.  Would he think this class is too young for him and lose interest?  Would he think our games were too childish?  Would he disrupt the class and cause the others to want to do the same?  But having him in my class for 5 minutes, I knew my fears were unfounded.  This boy was different.  He was a blessing to me.  He came to Sunday School so hungry to learn and to participate.  It began rubbing off on the boys a couple of years younger than them.  They began to play the games with even more passion.  And they listened so well to the lesson!  I was thankful.

The 3rd Sunday he came, he walked into the room and said, "This is the best day of the week!!"  I cannot tell you what it did to this Sunday School Teacher's heart.  It made me want this to be the very best lesson, the very best class.  I taught with more of a joy and fervancy.  It was a great day!  That Sunday, this boy made the very best decision he would ever make....He accepted Christ as his Savior!  We were so excited!! And even though my son led him to the Lord, I knew that I had a small part in that.  It was so encouraging to me.  It was just what my heart needed.

9 days after he got saved, we received a phone call.  His Mom passed away.  Oh how my heart broke for him!  To be 12 and to lose your Mom....how very difficult.

Today is the day of the Memorial for his Mother.  We learned yesterday that the boys' father will take them in and they will be moving to Georgia.  They will no longer be coming to Victory Springs Independent Baptist Church.  And he will no longer be in my class.  When I learned that, I just kept thinking about him walking into Sunday School saying, "This is the best day of the week!"  I don't want him to lose that joy of coming to church!  He was just beginning his journey as a child of God, and I don't want him to not live for Him!

So, I knew I wanted to write him a letter to encourage him.  I knew there were many things I wanted to say and tell him.    But, what do I say?  What do you say to a Sunday School student that you only had in class 4 times?  Did I teach him enough?  Did I tell him in those 4 Sundays how much God loves him?  Was it enough?

As I began to write, the words began to flow.  I told him how thankful I was that he was in my class.  I thanked him for the encouragement he was to the younger boys. I reminded him about the day he accepted Christ, the best day ever for him!  I encouraged him to remember that day and told him how important it is to remember the good things.  Don't focus on the bad, be someone who focuses on the good.  I also told him to get into a good Independent Baptist Church and to go everytime the doors are open!  I told him to read his Bible everyday and to pray often.  I encouraged him to let Jesus be his very best friend!  Then, I let him know that the Preacher and I, along with VSIBC are here anytime he needs us.

Then, I signed my name and the scripture passage that I put on several of my letters. Ephesians 3:14-21.  As I opened my Bible to reread that scripture again, I felt like Paul for a moment.  The letter he wrote to the church at Ephesus said the very things that my heart wanted to say to my Sunday School boy.  I understand now.  I understand the desire for God to strengthen the heart of those hurting, and the desire for someone to be grounded in the love of God.

Some Sundays being a Sunday School teacher can be trying.  Sometimes you wonder if the students are even listening.  But, don't give up.  The blessings that come, and the love God gives you, far outweighs those Sundays that are difficult.  I'm so thankful for 4 Sundays in God's Word, teaching my Sunday School kids.  It's 4 Sundays that God gave at just the right time. 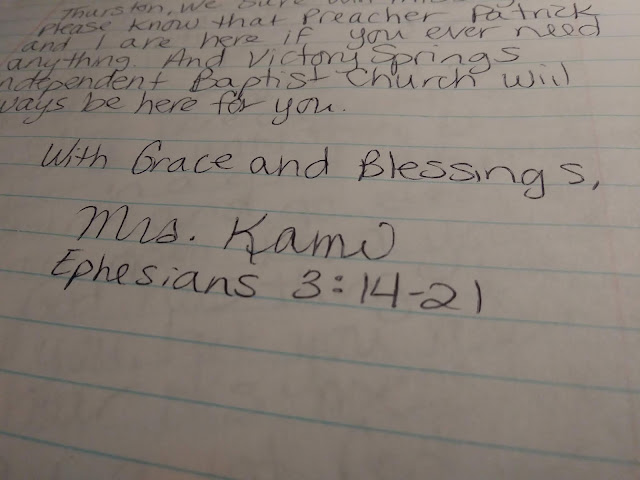