Choosing to be early 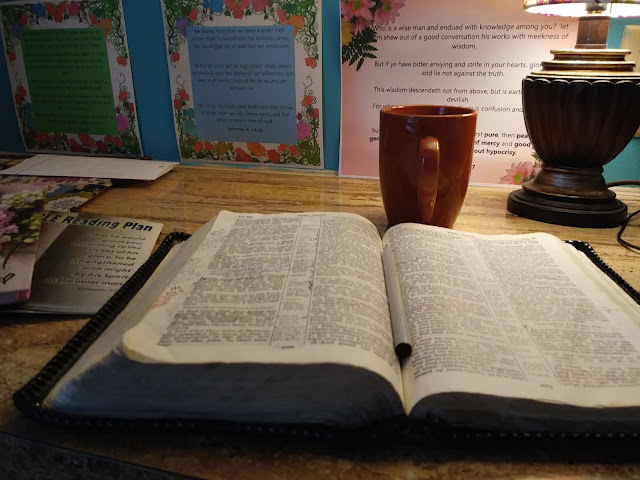 When my Silas was little he was an early riser... I mean up with the sun type of early!  In St. Barths the sun was up and shining before 6.  When he would wake up, then baby Callie would wake up.   So that meant they were my alarm clock.  When they woke I did.  So usually I would have my devotions while they sat with me and drank their milk.  Or I would have them as they played quietly (somewhat) on the floor after breakfast.  Or if all of those plans failed, I would have my quiet time alone with the Lord during naptime...which was usually 1 or 2 o'clock.

My goal was to not let a day go by without reading something from God's Word.  That was a good goal.  Until I hear a message by David Gibbs.  I love his sermons and always walk away determined to live my life better for the Lord!  One of the illustrations he used was about his Mother.  He said there never failed a day when he would wake up and see his Momma praying or see evidence that she had had her time with the Lord. (by seeing her bible at the table)  He said that before he ever opened his eyes in the morning that he had been prayed for and that is what helped him through his teenage years, time in law school, and serving in the ministry.

Because of his Mother's time with the Lord, he is what he is today!  That was such a convicting statement to me! My mind then thought of all the reasons why I couldn't do that...Silas is an early riser, I can't possibly wake before him!...I have babies that sometimes wake through the night, I need that extra rest!...I'm not an early person!  And the excuses went on and on.  But, I couldn't get away from the thought of David Gibbs waking and seeing his Mother with her head bowed in prayer.  I knew I wanted to be that kind of Mom.  I determined to start having my quiet time with the Lord first before anything else! Even if it meant the alarm went off at 5:30.  And I'm so thankful that almost 9 years ago I made that decision!

Starting my day with the Lord is the best way.  I can't imagine facing the days demands without time with Jesus first!

I have found a few things that help with this:
~ I have the coffee pot ready to go, even the creamer and sugar in the cup so all I have to do is pour and my coffee is ready!
~ I have my Bible and notebook in its place so I don't have to go looking for it.  (When the 3 little ones were babies, being quiet was of the essence!)
~ Once I started the routine, after about a week my body was used to getting up early and oftentimes I'm awake before my alarm even goes off.
~ Realize that if the plan doesn't work, don't forsake time in God's Word and time of prayer. Read and prayer in the afternoon, but my goal was first things first!

Looking back I am so glad God let me hear that message!  My mornings are so special and I wouldn't trade any extra time to sleep for time with God!

Linking up today with A wise woman builds her house
Posted by Kami Gimenez at 8:49 AM

Labels: From my heart