When we talked about our family fun night earlier in the week, Josh mentioned he would love it if we could make corndogs! MMMM, that's one of those foods that if you haven't had in a while, it sounds sooo good! (We can't get them here) So, I looked up on allrecipes (love that site!) and found a great recipe. 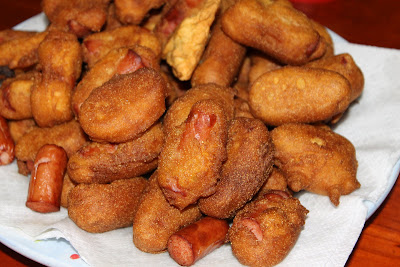 They turned out great! We decided to make them as corndog bites instead of on sticks. Oh la la!
As Patrick was frying them up, he told me he wanted to play a couple of tricks on Josh. Usually when we try new foods on FFN, we all have our first taste together. So, in Josh's corndog there wasn't a dog! He took a bite, stared at his corn dog and said, "Well, it's good, but mine doesn't have a hot dog in it." Ha! Then, we filled one of his with chopped up green olives. (Not his favorite) He took one big bite, stared at his corndog again, and then made the most horrible sound while running to the trash can. Ha! Don't worry, after he recovered he ate plenty of corndogs until he was stuffed! 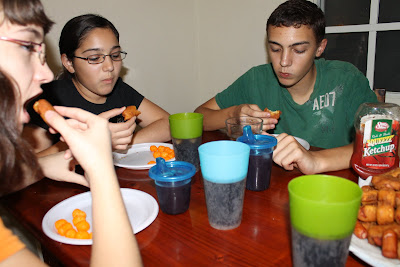